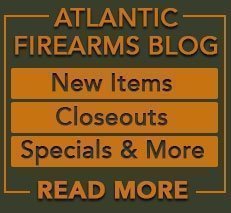 The famous AK 47 was developed by Mikhail Kalashnikov and was accepted for Russian Military service in 1947.  AK represents Avtomat Kalashnikova, they were first produced by the Izhevsk Arms Factory. The AK47 Assault Rifle was designed to be simple, reliable, and easy to manufacture. The AK operating system is gas operated with a rotating bolt, known for loose tolerances that perform well in dirty and harsh conditions. The AK Rifle has matured into several different models including the AKM and AK74 just to mention a few. Fielded in over 100 countries and adopted by 55 different nations the AK47 is arguably one of the most popular military rifles still today. The legendary reliability of the AK 47 design and system has made it a favorite of US recreational shooters and collectors for many years. Atlantic Firearms offers the widest selection of AK47 Rifles for sale and also feature AK Pistols, AK Shotguns and other Kalashnikov AK47 variants. We offer top Quality Semi Auto Sporting Kalashnikov Guns For Sale to meet your AK47 Price and needs.